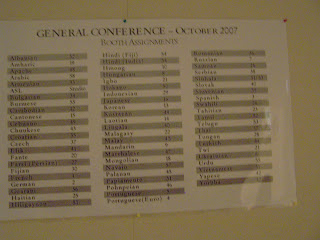 Below is myself in the one of the rooms where the translations take place during General Conference. 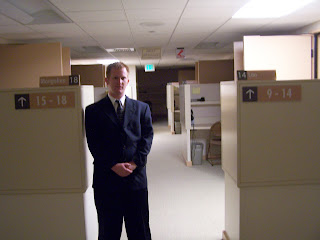 In one of the rooms is where American Sign Language Interpreters sit in front of the camera and interpret the talks as they unfold. Either the Choir sings or when the audience the hymns, a Deaf person will interpret the music in front of the camera. What is being done in that room will be broadcasted to  Deaf members who are either in the audience at General Conference as well as those who are at home watching it on television or the Internet. The recording is seen in the Church's broadcasting room as seen below: 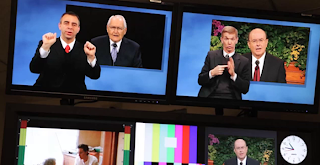 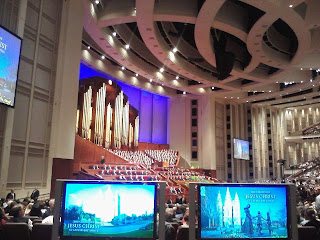 Throughout General Conference, Deaf members will either be able to see the the talks translated into American Sign Language on the left screen or watch the conference just with closed captions on the right screen. 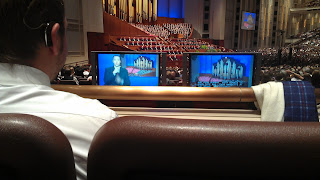 The reason why there are two screens is that not all Deaf people understand American Sign Language. There are many reasons for this. Some Deaf people were not taught ASL as a child but learned how to speak. Others learned different types of Sign Languages such as Signed Exact English (SEE), Pidgin Sign Language, the Rochester Method, and Cued Speech. Some deaf individuals have become Deaf later in life and never had the opportunity to learn ASL. There might be other Deaf individuals who know ASL but prefer to watch it with closed captions. As a result, watching General Conference with closed captions or in ASL gives Deaf members the freedom to choose to watch either screen to help them enjoy General Conference.
The LDS Church is aware of that not all Deaf people communicate in the same way. I appreciate the Church's sensitivity and efforts to make General Conference easily understood for all Deaf members in the Church here in America. Perhaps, some day in the future, the LDS Church will provide this opportunity for all Deaf people around the world in their nation's sign language.
Posted by J at 7:20 PM

Do you know if there's a way to watch conference with captions over the Internet? My mother is losing her hearing, but doesn't know any form of sign language.

I believe that you can watch conference with captions over the Internet on the official LDS website.

If that does not work, I would recommend talking to your local LDS bishop and stake president who can make some arrangements to see if you can watch conference with closed captioned.

You can also visit your local Deaf Ward. You can find the closest LDS Deaf chapel at www.deaflds.org